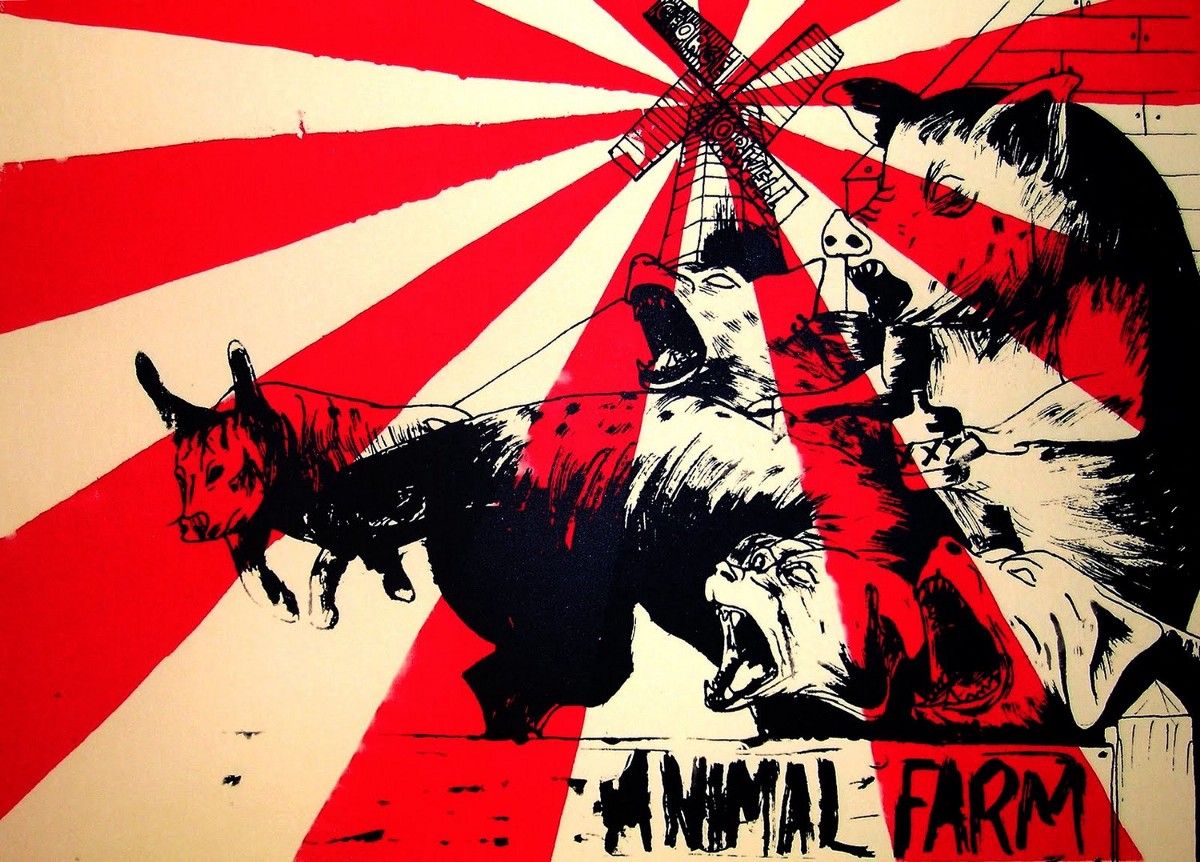 While reading Animal Farm, I decided to do my reflections a little bit differently than I normall do. Instead of writing one long response at the end of the piece, I decided instead to write a series of short reflections as I read the book whenever something popped into my mind. While I originally posted each as separate posts as I went along, I consolidated them all into one to save some space on the page. Enjoy!

The fact that the pigs are one of the few groups of animals who fully grasp reading shows the importance of information in power. While the pigs do “try” to teach the other animals to read, the other animals are not willing or are simply too stupid to. The pigs abuse this to their advantage, and due to this imbalance of knowledge, the pigs are able to constantly change the commandments to match their own needs. This gives rise to the propaganda machine that is Squealer, as they can shape the interpretation of the laws, as the animals cannot do it themselves. Knowledge is truly power, and those who are unable to wield it, are doomed to subjugation. Even the few animals who are capable of reading, such as Benjamin, don’t bother using it to their advantage, dooming themselves and every other animal. So in fact, knowledge itself is not power, but rather knowledge and the skillful use of it is power.

Napoleon and Snowball are two very different leaders altogether. Like Trotsky, Snowball tries to gain his power by gaining the support of the other animals, while Napoleon, like Stalin, prefers to work out of the political system. While Snowball’s weapon of choice is inspirational speeches and successful public debates, Napoleon’s is the use of force and attack dogs to drive Snowball off the farm. However, while Orwell paints Snowball (and Trotsky), in a brighter light than Napoleon, he makes sure to point out that Snowball still doesn’t have the interests of the other animals in mind. Snowball is just as interested in gaining power as Napoleon is, and wants the food in the pigs hands, he just has a different way of going about it. Along with different means, it seems as if they have different motives. While Napoleon is a paranoid egotist with a maniacal lust for power, Snowball thinks of himself as a genius who has the ability to lead the farm to greatness. In the end, force prevails over the righteousness of Snowball. Is it possible that there are times when idealism must end, and that only those who know how to properly game the system come out on top? I would say so.

I wonder if Orwell wrote Politics and the English Language before or after Animal Farm. Let me check. Huh, interestingly enough, it was after Animal Farm. More interesting though is that Animal Farm was released in 1945, literally right near the end of WWII. Anyways, all of Squealer’s speeches are direct examples of Orwell’s points in Politics and the English Language. I wonder if Orwell wrote Politics and the English Language after the lessons learned in speech when working on Animal Farm. According to Orwell in Politics and the English Language, language struggles to portray human thought, and even the slightest corruption of the language causes a corruption of the thought. Squealer uses this to his advantage when propagating the propaganda he spreads to the other animals. For example, when Squealer tells the animals that they will have to survive off of less food, he tells them “For the time being, it had been found necessary to make a readjustment of rations.” Instead of saying that there will be a reduction in rations, he says the word readjustment. This goes along with what Orwell says about Euphemisms, that they can be used to lesson to fears and anger of the people, and mitigate the chance of rebellion.

For the naive reader of animal farm, they have a built of set of preconceived notions against the pigs which force them into assuming that everything that the pigs do is evil. However, in the situation of the killing of Boxer the horse, the pigs were justified and rational, if not moral, in their decision. Animal Farm, being a communistic society, in which there is no way store value, the elderly, such as Boxer, are a burden upon society as they take in resources such as food, but don’t give any output and don’t have the potential to give output. Children, while they don’t produce output at the moment, have the potential to produce output. By killing the elderly, especially one that requires so many resources such as Boxer, it saves the needed resources for other animals. This sort of situation doesn’t occur in a capitalistic society, because we maintain a store of value, in which the elderly can save their money from before for retirement. This way, it is their money, and it is still beneficial to society as capitalism in spending based, and the more the elderly spend, it still benefits the economy. Capitalism is truly the superior system. For those who claim that communism, in its more ideal state without human corruption, is the most moral form of society, I must ask that is a system in which it makes sense to kill the elderly for the betterment of the society as a whole truly more moral?

Upon rereading what I have written so far in this entry, I realized that not only was the reader who claims the pigs were not justified in this situation naive, but Boxer himself, was perhaps the most naive character in all of Animal Farm. He essentially blindly sucked up every word that Napoleon said because he was loyal and assumed that the pigs has the farms best interests at heart.. Even when Boxer is old and aching, he still spends his last bit of energy pushing forward for the betterment of the society, a society which he is too naive to realize will spit him out as soon as he is unfit for labour. Boxer dreams of retiring with his friend Benjamin, and learning “the remain 22 letters of the alphabet” and does not realize the reality which actually surrounds him, at least not until it is too late, and he is already off to the glue factory. The pigs are of course power hungry and “evil” but is it not partially the fault of the animals for being so naive and stupid that they did not even realize how the pigs were seizing control and destroying the ideals of animalism?

The role of Moses in the story is one of the most interesting. Like his name itself would suggest, Moses is the bringer of religion to the farm. In his flagrant tales of Sugarcandy mountain, Moses fills the animals with hopes of a place that they can go live after they die. Along with the tales though, he brings the morals of religion, and so he is kicked out of Animal Farm as his preachings undermine the rebellion of the animals against Mr. Jones. However, once the pigs are in power, they call him back for exactly the same purpose, to quell any movement of rebellion. On top of this, Moses represents the role of religion in communism. After WWII, Stalin reinstated the Eastern Orthodox Church in Russia as a way for the people to escape their misery. Moses reappearance on Animal Farm allows the animals to forget their misery in his joyful stories. This reinstates my personal belief that religion is used as a tool of power, a mean in which to control the masses using social means. Instead of using military might to prevent someone from committing a crime, it is easier and more cost-effective to convince them using psychological means to not commit the crime, and this is twisting of religion, something that could have been a beautiful thing, that politics has created in society.

In the final chapter, Napoleon has a meeting with the other farmers including Mr. Pinkleton. In the novel, even the neighboring farmers were allegoric. Frederick represented Hitler, in which they made peace (by selling him the timber), but then broke it (due to the bank loan fiasco). Meanwhile, Mr. Pinkleton represented the US. After WWII was over, the US and Russia were in the uneasy position of having to figure out hat to do now that their temporary alliance was up. Napoleon and Mr. Pinkleton seem to be being friendly towards each other, even toasting to the good fortune of Animal Farm, just as the US and Russia were, but then it is found that they are both cheating and deceiving each other. This is actually pretty amazing how insightful Orwell was considering the book was published in 1945, as this was actually happening. Interestingly enough, if Pinkerton is supposed to represent the US, does that mean that Orwell is claiming that the United States was just as bad of a dictatorship as the Soviet Union? I would have to disagree with this representation. While, the US wasn’t perfect, I think equating it with the drunkard farmer Pinkerton, who ran his farm just like Napoleon is a stretch. The United States was much better than the Soviet Union, we actually cared about our people, and we were still a democracy, instead of full dictatorship like the Soviet Union. Even more interesting is that Orwell, a contemporary is writing this at a time of extreme American patriotism, and without the hindsight that we get to America’s misdeeds during the war. Why does Orwell assume the United States will be bad, and even match the atrocities of the Russians?