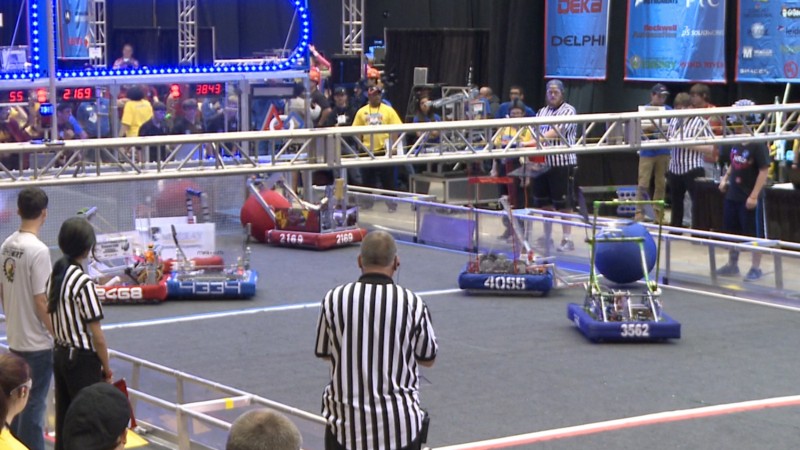 So far in my robotics career, I have participated in numerous robotics competitions, each of which was unique in its own way. Robotics competitions are a great way to further one’s knowledge in robotics, technology, and engineering through friendly competition. In general, I split tend to consider robotics to have three main parts, mechanical, electrical, and programming, each of which are interrelated yet unique in their own ways. Also, an important distinction to make when considering robotics competitions is whether the competition is based on autonomous or human-controlled robots, a major aspect that effects the entire experience of the competition. It is important to note that I personally am somewhat biased when it comes to this, preferring autonomous robotics, electrical work and programming, and this influences my personal judgement on these competitions.

Robocup Jr. is arguably my favourite robotics competition, however this is completely due to my personal preference. I was first exposed to RoboCup Jr. at Storming Robots in the Rescue competition, but have now switched over to participating in the Soccer competition. The reason I enjoy RoboCup Jr. so much is that it is based completely on autonomous robotics, instead of human controlled, which is my own personal preference. Furthermore, because of this autonomous based robotics, RoboCup Jr. is far more electronics and programming based than mechanical. However that isn’t to say that it has no mechanical component. One of the most exciting parts of the mechanical component of RoboCup Jr. is the openness of allowable build materials. I often joke that if you can figure out how to fit a nuclear reactor to power the robot, it’s allowed! Now obviously that’s a stretch, but it’s fun being able to build your robot out of anything and hack everyday materials to create robot parts. For example, we used the suspension off of an RC car, to create a spring based kicker, and used a fondue skewer to create the magnetic shaft of a solenoid. Although, I may have some sort of bias towards RoboCup Jr. considering that the BRHS RoboSoccer Club is my brainchild which I started at my school. One of the main problems with RoboCup is that in the US, the organization has an absurd policy of not accepting sponsors, which in turn doesn’t allow it to become widespread in the US. However, on the international level, it is very popular and attracts participants from many countries around the world.

FIRST is probably one of the best student organizations out there. FIRST is a great way for students to be inspired to pursue robotics and engineering. FRC is definitely one of the coolest robotics competitions as it allows students to create large, mechanically-intensive robots which perform impressive tasks. FRC teaches a lot mechanical skills, however due to its*heavily *human-controlled nature, its programming and electrical are extremely simplistic. The one interesting programming procedure that I have worked with in FRC, though, is the camera processing, a skill which I used in my RoboCup endeavors as well. FRC opens me up to the high-level mechanical design of robotics that I don’t experience through the smaller robot sizes of the other competitions. The other great thing about FRC is its great Team Development (Not Robot-Oriented) aspect. Through FRC, I have gotten a chance to work heavily in strategy, graphic design, and animation, things I would not normally get a chance to deal with so deeply in other robotics competitions, and really sets FIRST apart. My FRC Team, Test Team 303 has provided a great community of students who are also interested in robotics and can cooperate well together in both work and play.

It may be hard to justify ZeroRobotics as a robotics competition, despite its name, because well, we don’t actually make a robot. ZeroRobotics is a strictly programming challenge, but incorporates heavy elements of physics, calculus, and the engineering process. In ZeroRobotics, sponsored by big names like MIT, NASA, and DARPA, we program satellites called SPHERES to perform tasks similar to issues NASA is currently facing in the real world such as how to collect space debris or deflect incoming objects. On top of the technical skills, it also is a pretty interesting experience working side by side on an alliance with teams across the country! The coolest thing about ZeroRobotics is the fact that in the finals, the code is sent to actual satellites on the International Space Station and run by astronauts there. It is by far the greatest feeling, knowing that at the age of 16, I have something that I wrote, with my own hands (okay fine, my own keyboard) running in space!

In my experience, FTC serves two purposes. Either, 1: Serve as a training platform for new students for an FRC team (which is what Team 303 does) and 2: Serve as a Robotics Competition for schools that can not afford the heavy financial requirements of FRC. FTC does a decent job at serving both these jobs, and that makes it a good middle ground robotics competition. Like its “older brother”, FRC, it is *mostly *human controlled, and thus mostly heavily mechanical based, and even less electronic and programming intensive than FRC. Its purpose as a training session is generally good, however, in my experience through 303, the dullness of FTC often actually drives some new students away from FIRST. Furthermore, the majority of the veterans, experienced with the thrill of FRC, are often bored with FTC, leading to them not putting in the full effort into FTC. However, regardless, for the new members who make it through the FTC season, are able to learn the skills needed to perform in the FRC season. The other purpose, serving as an alternate competition for teams who cannot afford FRC, works great, as it is similar to the ideals of FRC and follows many of the similar ideas. However, it is far less popular than its main competitor, VEX, but has been making steady gains.

VEX is a great robotics competition that is extremely similar to FTC, in gameplay, robot size, and mechanical-orientation. It is generally rare, for a team to use VEX as a training platform for FRC, so the main function of VEX is to serve as a cheaper alternative to FRC, as it does not have an “older brother” of its own. However, one thing that I deeply disliked about VEX is the extreme limitedness of its parts. This may be completely wrong, but somehow I get the feeling that FIRST is out to truly help kids learn and grow. VEX is out to make money. Every single part you use must be created by the VEX company, and so I sometimes get the (possibly very wrong) feeling that VEX uses the robotics competition to sell its products. However, VEX has lower barriers to entry than FTC, and so enjoys far greater participation, while still teaching the same skills as FTC, with once again, very mechanically-oriented, but not electrically and programatically. However, one interesting thing that VEX does have that is actually very interesting is a side-competition called VEX programming-skills, which is essentially the entire VEX game, but completely autonomously. I think this could be an interesting challenge, programatically, although perhaps not electrically giving the simplicity of VEX sensors. However, I have not personally participated in the VEX programming-skills challenge, so these are just assumptions, but I would be interested to give it a shot if I get the opportunity and time to do it in the future.

This competition is solely for younger students, of the elementary and younger middle school level. This competition is the perfect stepping stone into robotics as it exposes students to robotics using a toy that they are already familiar, Legos, and offers colourful and inviting fields and games. This is the first robotics competition I ever did, and I believe it is a great opportunity for younger students, as it not only teaches robotics, but also has awards for teamwork and projects. Along with working on the robot, teams have to concurrently work on research projects relating to the year’s theme, which can range from climate change, biomedical engineering, space exploration, and many more. This research project allows students to learn some science topics along with the robotics.