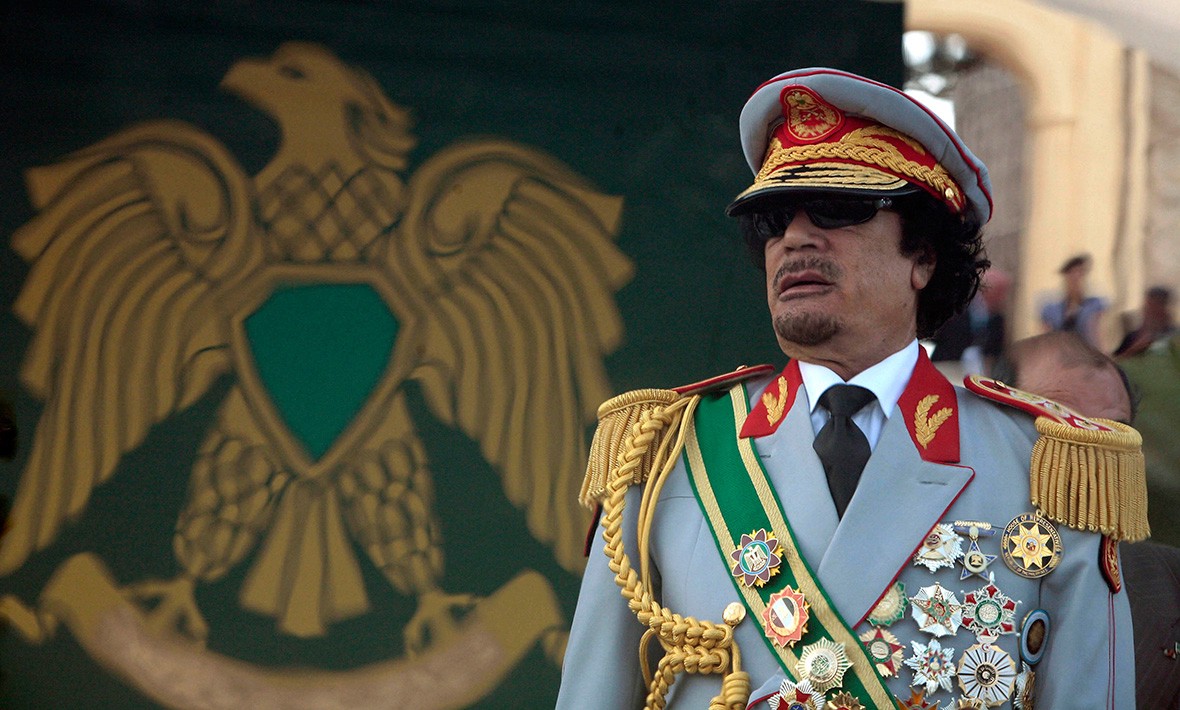 Gaddafi’s Libya as an Empire

The spring of 2011 was a time of turmoil. It was a time of democracy. It was a time of revolution. The Arab Spring saw the end of one of the most interesting modern empires today, Gaddafi’s Libya. The leader of the Libyan nation was a dictator by the name Muammar Gaddafi and by the end, his people despised him. However, it was not always this way. During his ascension to power and early building of his empire, Gaddafi was a great leader, helped the nation, and was loved by the Libyan citizens.

To fully understand the rise of the Libyan empire, it is essential to understand the culture and demographics of Libya itself. Libya is a large country, about the size of Alaska, located in Northern Africa. Despite its size, it is very sparsely populated with only 6.5 million people, with the majority concentrated along the coast in Tripolitania, Cyrenaica and Fezzan, while the lower part of the country is largely the Sahara desert. It is neighbored by Egypt and a small part of Sudan to the East, Chad and Niger to the South, Algeria and Tunisia to the West and the Mediterranean Sea to the North. Libya is part of a region known as the Maghreb, which is characterized as a crossroads of Arab and African cultures. The vast majority of people (95%) read, speak and write in Arabic (with the rest speaking an ethnic language called Berbers), and follow many of the customs and traditions of its Eastern neighbors, including Egypt. The country’s official religion is Islam and it is a high oil-exporting nation unlike its Saharan neighbors to the West and South. However, it still retains some African heritage; the country’s cuisine is distinctly like its southern neighbors. Historically, Libya has maintained strong tribal roots with about 140 ethnical tribes and clans in Libya that will play a big role in Gaddafi’s empire.

Italy, which hovers over Tripoli in the Mediterranean, controlled Libya in its empire from 1912 to 1951. Gaddafi’s tribe, Qadhadfa, played a part in the nation’s liberation from Italy. Later in his life, he even claimed that his paternal grandfather was the “first martyr in Khoms, in the first battle of 1911.” When he was 6, he viewed the deaths of his two cousins at the hands of the Italian Royal Army. This event dramatically changed his views on colonial powers, the Western world and particularly Italy. During this time in school, Gaddafi was fascinated by events in the Arab world, especially Egypt. He saw Egyptian president Famel Abdel Nasser as a role model and saw him as a hero during his rise to power in 1952. He then joined the military and trained in Libya and the United Kingdom’s, reaching the rank of Lieutenant. Despite his actual rank, he preferred to be called Colonel Gaddafi. Even in 1976, after he took power, when the Arab Socialist Union’s National Congress tried to confer the rank of Major General, he accepted the honorary rank but stated that he should be continued to be called Colonel and even work the rank of Colonel on his uniform. This was a very strategic maneuver as it made him seem much more relatable to the people as he did not seem like an antiquated general, but rather a fresh military face.

On September 1st 1969, Gaddafi led a coup d’etat with his fellow officers. They carried out the mission while King Idris of Libya was in Turkey for a medical treatment. Among the conspirators, he was chosen to become the Revolutionary Chairman of the new Libyan Arab Republic, once they abolished the monarchy. Upon gaining power, Libya enjoyed a time of economic prosperity as Gaddafi used the country’s natural resources to develop the nation. The country’s literacy rate rose from 10% to 90%, life expectancy rose from 57 to 77 years, equal rights for women and blacks were established, welfare systems were instituted, and financial support was given to universities. Gaddafi’s popularity skyrocketed. As an extremely effective form of propaganda, Gaddafi would direct many large infrastructure projects, such as the Great Manmade River, a series of pipes that brought fresh water to people all over the country. This “water highway” is often called the 8th wonder of the world. All this was done without foreign debts, leaving Libya in a great economic position and debt-free.

In order to solidify his political propaganda, Gaddafi took some time to write his own manifesto, The Green Book, a tribute to Mao Zedong’s Little Red Book. In the book, he bolstered himself as a savior of Libya and Africa by denouncing both capitalism and communism and proposed that dictatorship is the only proper form of government. He wrote, “The era of the masses, which follows the age of the republics, excites the feelings and dazzles the eyes. But even though the vision of this era denotes genuine freedom of the masses and their happy emancipation from the bonds of external authoritarian structures, it warns also of the dangers of a period of chaos and demagoguery, and the threat of a return to the authority of the individual, the sect and party, instead of the authority of the people. Theoretically, this is genuine democracy but, realistically, the strong always rules. That is, the stronger party in the society is the one that rules.” This popular book is what allowed him to rule over his citizens with great ease.

Despite Libya’s early success, Gaddafi was not content. He wanted to change Libya’s perception on the world stage. He forged a powerful alliance with Egypt’s Nasser. When Nasser died in 1970, Gaddafi used his close friendship to frame himself as Nasser’s successor as the leader of Arab Nationalism. His goal was to merge the Arab states of North Africa into one, the “Great Islamic State of the Sahel.” He sent missionary work to both Sudan and Chad and successfully Islamized them, so that a potential annexation would go much more smoothly. However, Sudanese President Gaafar Nimeiry, refused to join Libya, and then signed a peace agreement with Sudanese Christians. Once diplomacy failed, Gaddafi responded by launching an invasion in Chad. After a quick war due to the support of many Chadians, Gaddafi placed an ally, Hissene Habre, in charge of Chad.. After many power struggles within the Chad, Oueddei was exiled to Algeria and Habre became the ruler of Chad. Habre became allies with Gaddafi and helped him with his “Green Revolution,” an attempt to make Libya the center of the African Arab World.

Nasser’s successor, Anwar Sadat, and Gaddafi made a partial union between the two nations. However, when Gaddafi a suggested a full union, with Sadat being the President and Gaddafi being the Defense Minister, Sadat didn’t trust him and refused. Gaddafi declared war on Egypt but lost by a small margin. When his onceally, Sadat, died on October 6th 1981, Gaddafi was so overjoyed that he declared it a national holiday. Throughout Gaddafi’s rule, he caused conflicts with many other nations trying to merge them including Tunisia, Algeria and Morocco. After Libya’s “falling out” with Egypt, Gaddafi made a new friend and ally in the Venezuelan President Hugo Chavez. After the “fall-out” Gaddafi gave up on the Arab world and began his biggest political project, The United States of Africa. With support from Local Warlords, who gave him the title, King of Kings, and Nelson Mandela, he even planned on making an African currency, the Dinar, like the Euro.

While Gaddafi was being praised by his own citizens, his reputation in Western nations was unstable. Almost as soon as taking office, Gaddafi shutdown many American and British military bases including the US’s prized Wheelus Air Base. Gaddafi also told western oil companies that unless they shared their revenue, they would be expelled from the nation. In the Green Book, he claimed that the West was performing acts of terrorism against Libya. In a Time interview, he stated “America is involved in a conspiracy [against the Arab world], primarily because of its policy toward Israel. In our view, whoever is against the Americans stands with us. The enemy of your enemy is your friend.” Tensions heightened when in 1972, in response to hatred from Israel and other North African nations, Gaddafi tried to persuade both China and Pakistan into selling Libya a nuclear bomb. When both attempts were unsuccessful, Gaddafi then focused on making chemical weapons. Gaddafi was put on international shame for his terroristic activities including his part in the Lockerbee bombings and support for the Irish Republic Army.

After the fall of the Soviets, Gaddafi reassessed his position on the global platform at began to make better relations with the West, even admitting his part in the Lockerbee bombings and giving up his supply of over 23 metric tons of mustard gas and 1,300 tons of chemicals. However, it was too little, too late and Gaddafi did not give up many of his treacherous ways, including human rights issues. Gaddafi’s godlike affection from within his own country fell by the late 2000s as the Libyan economy fell drastically and unemployment rocketed. Unable to stand it anymore and being inspired by the Egyptian Revolution, in the spring of 2011, civilians organized protests against Gaddafi. Soon the uprisings backed by NATO turned into a full-on civil war in which Gaddafi lost his power and then soon after, his life.

While Gaddafi did a very good job at building the foundation of his empire through his massive propaganda machine, his biggest flaw was being unable to shift this machine towards other nations. Gaddafi expected other rulers to always comply by his rules like his own citizens did. This worked in the case of Chad, where he sent missionaries to spread pro-Libyan propaganda, which made his essential takeover much smoother. However, in later attempts of unification with other nations, he did not do this, and thus never had the support of his potential conquered peoples. If he had continued with the strategy employed in Chad, endeavors such as the United States of Africa would have been far more successful. Furthermore, with few allies in his ring, he angered many bigger players than himself such as the UK and USA, which caused him major point on the international stage, which only drove away other potential allies in fear of invoking the wrath of the United States. Muammar Gaddafi’s Libyan empire is a great example of empire building but also one of an empire that did not expand and maintain itself properly due to external factors.