As I’ve just recently turned 21, I figure it’s time I grew past my days of chugging Natty Lights in my frat house basement, and begin to appreciate some real liquor. I’ve started to look into different types of cocktails, and one that caught my eye (and tastebuds) was the Moscow Mule, particularly this recipe. Excited to try my hand at making it, a friend’s Thanksgiving party provided the perfect occasion.

After reading what seemed to be the simplest recipe ever, I headed over to the grocery store to pick up some Ginger Beer and Vodka (assuming the friend had some limes, cause who doesn’t?).

At the store, however, I decided I needed to add some personal pizazz to the mix, not just follow a recipe literally called “The Easiest Moscow Mule Recipe”. So, picked up some cinnamon sticks, cause why not? Cinnamon is delicious.

Fast forward a few hours at my friend’s house. What do you know? She doesn’t have any limes… Defeated, I thought my first cocktail mixing experience had ended before it even started. And then, my friend pointed to her shelf, and said “Well, I do have some oranges?” What the hell, they’re both citrus, I guess? Put my concoction together, and what do you know, it was damn good! 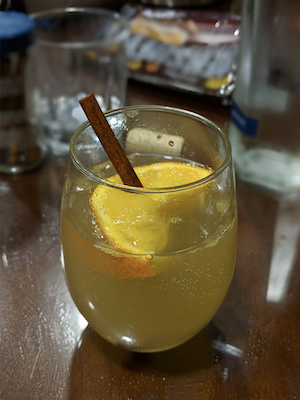 Decided to name it a Florida Mule (cause oranges grow in Florida, at least according to the book Tangerine, which I for some reason have in my head since 5th grade english class). Since then, it’s become my signature cocktail! And so, without further ado, the recipe itself: